IoT based Lock System – A QR based lock system has been devised using IoT and Electric Strike.

One of the most accepted and widely used kind of locks are the rfid based swipe card systems which are mostly installed in hotels and access control places as data centers. Here an advanced security system is being used unique QR ( Quick Response)  identification (referred to as UQID henceforth) code.

The UQID system presented here is a new methodology implemented to provide advanced security services to hotel rooms along with better “hospitality” to guests. The existing systems have a hardware key (rfid swipe cards) which become an extra weight to the pockets of the guests, So we digitized the key in this project using mobile phone unique keys.

The uniqueness of this system so designed is that instead of using UQID ( Unique QR ID on the phone the same is being used for the first time on lock. The user scans the lock QR and gets an affirmative response from the cloud for grant of access MD5 hash is used for added safety. Unlike more prevalent systems where a dynamically generated QR code on the phone is scanned by a door mounted camera, our system scans a static QR code printed on the door and uses the phone encryption to grant access.
Our system stand unique as the log of access is on the cloud db. The system is tested while in use at a local public convenience place. We are able to provide access to users via this mechanism. Access control and log is managed from this system.

The future of Access Control would shift from RFID cards to mobile phone. The whole system authentication would be based on your phone which would not only act as an ID but also virtual key to entry in the room. Your Mobile is Your Identity

This solution eliminates reader as well as door controller costs.

Posted by Net Legends at 2:29 AM No comments: 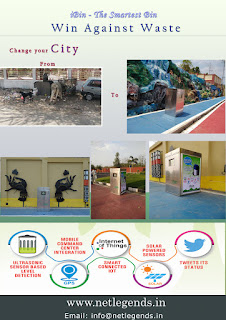 Ibin is an IoT based product which calls the trash truck when it’s time to clean. It offers full containment touch less operation. It’s a futuristic product which uses public socio platform like twitter to inform about its fill status. These Solar powered bins are Made of SS 304 with ergonomic design which helps in easy cleaning . It has inbuilt illuminated facade which can be used for advertisement or social messaging this glows in night for easy identity.

The Bins can be easily connected to central command and control center via 3G / 4G or fiber network.

They can truly be called “iBin – the Smartest Bin”.

Posted by Net Legends at 6:05 AM No comments: